US researchers have found oddly-shaped blood cells in heart attack patients, indicating that a blood test could help predict whether a patient is at risk of an imminent cardiac emergency.The study by the Scripps Translational Science Institute (STSI) found that the endothelial blood cells from heart attack patients are abnormally large and misshapen, sometimes appearing with multiple nuclei.

That could make them reliable indicators of an impending heart attack, according to the study published this week in Science Translational Medicine. “The ability to diagnose an imminent heart attack has long been considered the holy grail of cardiovascular medicine,” said Eric Topol, the study’s principal investigator and director of STSI. 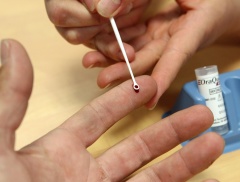 US researchers have found oddly-shaped blood cells in heart attack patients, indicating that a blood test could help predict whether a patient is at risk of an imminent cardiac emergency. (AFP Photo/Francois Nascimbeni)

Doctors have long been able to identify risk factors — such as smoking, obesity and high cholesterol — that can put patients at greater danger of heart disease, but cannot predict imminent attacks.

The study involved 50 patients who showed up at emergency rooms with heart attacks at four acute care hospitals in San Diego, California, and who were found to have the unusually shaped cells. “With some additional validation, the hope is to have this test developed for commercial use in next year or two,” said researcher Raghava Gollapudi.

Heart disease is the leading cause of death in the United States, causing some 800,000 deaths every year, according to the Center for Disease Control.

Too often, people pass a cardiac checkup only to collapse with a heart attack days later.  Now scientists have found…