Too often, people pass a cardiac checkup only to collapse with a heart attack days later.  Now scientists have found a clue that one day may help doctors determine if a heart attack is imminent, in hopes of preventing it.  Most heart attacks happen when fatty deposits in an artery burst open, and a blood clot then forms to seal the break. If the clot is too big, it blocks off blood flow.

The problem: Today’s best tests can’t predict when that’s about to happen. “We don’t have a way to get at whether an artery’s going to crack, the precursor to a heart attack,” said Dr. Eric Topol, director of California’s Scripps Translational Science Institute.

Wednesday, Scripps researchers reported a new lead—by searching people’s blood for cells that appear to flake off the lining of a severely diseased artery. Topol’s team measured high levels of those cells, deformed ones, floating in the blood of 50 people who’d just had a heart attack. The research is reported in the journal Science Translational Medicine.

Next, Topol said his team soon will begin needed studies to learn how early those cells might appear before a heart attack, and if spotting them could allow use of clot-preventing drugs to ward off damage. Some San Diego emergency rooms will study an experimental blood test with chest-pain sufferers whose standard exams found no evidence of a heart attack, he said.

“This study is pretty exciting,” said Dr. Douglas Zipes of Indiana University and past president of the American College of Cardiology. It suggests those cells are harmed “not just in the minutes prior” to a heart attack, he said, “but probably hours, maybe even days” earlier. 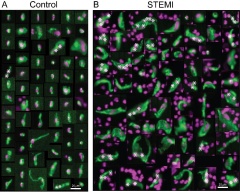 This undated handout images provided by Science Traditional Medicine/Scripps Translational Science Institute, shows on the left normal, healthy circulating endothelial cells (CEC). On the right are CECs from heart attack patients which appear abnormally large, misshapen and with multiple nuclei. Too often, people pass a cardiac checkup only to collapse with a heart attack days later. Now scientists have found a clue that one day may help doctors determine if a heart attack is imminent, in hopes of preventing it. (AP Photo/Scripps)

About 935,000 people in the U.S. have a heart attack every year, according to government figures. Doctors can tell who’s at risk: People with high blood pressure and cholesterol, who smoke, have diabetes, are overweight or sedentary.

But there’s no way to tell when a heart attack is imminent. Tests can spot that an artery is narrowing, or if a heart attack is under way or already has damaged the heart muscle. They can’t tell if the plaque inside arteries is poised to rupture.

So it’s not that uncommon for someone to suffer a heart attack shortly after passing a stress test or being told that their chest pain was nothing to worry about. Wednesday’s study, funded by the National Institutes of Health, investigated cells shed from the endothelium, or the lining of blood vessels, into the bloodstream. They’re called “circulating endothelial cells.”

First, Topol’s team paired with Veridex LLC, a Johnson & Johnson unit that makes technology used to find cancer cells floating in blood. Could it find these cardiovascular cells, too? The team took blood samples from 50 heart attack patients—before they had any artery-disturbing tests or treatments—and from 44 healthy volunteers. They counted lots of the endothelial cells floating in the heart attack victims’ blood, and very little in the healthy people’s blood.

The big surprise: The cells in the heart patients were grossly deformed. “Sick cells,” is how Topol describes them. The study couldn’t tell when those abnormal cells first appeared—and that’s key, said Wake Forest’s Little. It’s not clear how many heart attacks happen too suddenly for any warning period.

But Topol theorizes there are plaques that break apart gradually and may shed these cells for up to two weeks before the heart attack. He cites autopsy studies that found people’s arteries healed several plaque ruptures before the final one that killed them.

Topol said Scripps and Veridex have filed for a patent for a blood test to detect the abnormal cells.

Patients with high blood sugar run an increased risk of dying if they have a heart attack, and diabetics are…

US researchers have found oddly-shaped blood cells in heart attack patients, indicating that a blood test could help predict whether…